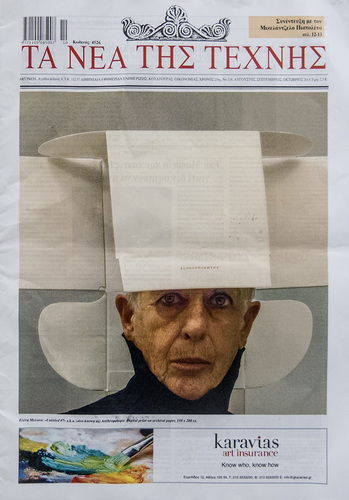 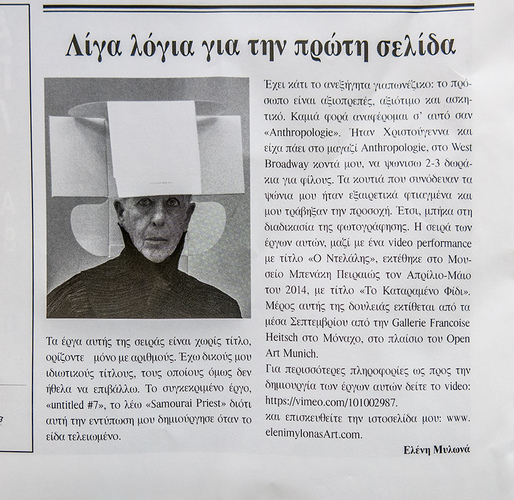 The Benaki Museum is pleased to present Eleni Mylonas’ new works titled The Cursed Serpent. The exhibition will be open to the public from Thursday April 10 to Sunday May 25. The official opening will take place on Monday April 14 at 8:00 pm. The artist will be present. This exhibition and the accompanying catalogue are dedicated to the artist Chryssa.

Mylonas, born in Athens and based in New York, is an artist proficient in multiple media. A photographer, painter and video artist, Mylonas includes digital media, sound and performance in her repertoire. The works in this solo show were inspired by the improvised headgear that the protesters donned to protect their heads during the deadly clashes in Tahrir Square. Fascinated by the curious headpieces she saw on line, Mylonas made a series of sketches followed by oils on canvas based on news photos. Eventually she felt compelled to emulate the protesters by putting an array of objects on her own head and making photographs of herself. While they might be called self-portraits they are not likenesses of Mylonas; Rather they are un-likenesses, even if completely recognizable, since they are not visual biography or psychological studies but visual signifiers and inquiries.

Blown up to approximately six feet—her head is further abstracted, as if to emphasize that the function of her face and presence is simply to act as a ground, a tabula rasa across which a parade of other identities—a cross section of the global citizenry—can be glimpsed. It is not Mylonas’ identity that is being constructed in this project. Rather it is a proliferation of identities, the cast of a contemporary populist theatre that she has conceived and in which she plays all the roles–as herself. She is all of these people, a quixotic Postmodern Every person, a town crier dispensing information. She summons up Karagiozis the unprepossessing, popular folk hero of Greek shadow theatre and the incarnation of the common folk. Karagiozis is poor but spirited, charming but outspoken, disputatious, a mocker and comedian but extraordinarily resourceful and patriotic who carries all the burdens of the Greek people within his hunchback. I the end Karagiozis, whom Mylonas pays homage to in a video portrait in which she is effusively singing the familiar Greek song The Town Crier, solves everyone’s problem. He is the key to her project, Mylona’s statement of belief in the demos, its ability to outwit its oppressors and ultimately triumph.

Although her works range from the haunting, beautifully spare, photographic interiors of abandoned Ellis Island (PS1 New York, 1986) to the more formal, mathematical analyses of art works of the Quasi Periodic Space series (Art Resources Transfer, NY 2000) to the disturbing video of a bloated sheep’s carcass adrift in the sea (Destroy Athens 2007), they all hinge on Mylonas’ attempt to discover telling images that convey what the artist so acutely sees. In addition to the documentary impulse and serialization that have characterized her previous endeavors, this new series is imbibed with conceptual weight and visual richness.

Eleni Mylonas first came to New York as a graduate student on a Fulbright to study Journalism at Columbia University. She later studied photography at Central London Polytechnic and was invited to show her work at the Royal Photographic Society. Upon graduation she travelled extensively in Europe and North Africa and drove overland from London to Afghanistan to eventually return to New York in the early 1980s where she continues to live and work. She has taught at the New School in New York and has given many talks on her work. Her works are in many public and private collections.

All works by © Eleni Mylonas All Rights Reserved